We’re proud to announce that BauerFinancial has awarded Gateway Bank a 5-star rating for the 37th consecutive quarter! Here is BauerFinancial’s release about the award. 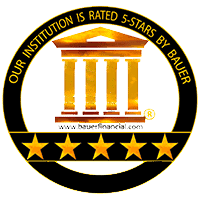 BauerFinancial, Inc, the Nation’s Premier Bank Rating Firm, commends Gateway Bank, Mesa, Arizona on its achievement of another 5-Star Superior Rating. Not only has Gateway Bank earned Bauer’s highest (5-Star) rating for financial strength and stability, it has maintained that top rating for 37 consecutive quarters. Earning and maintaining Bauer’s highest 5-Star rating indicates Gateway Bank is one of the strongest banks in the nation.

“BauerFinancial would like to congratulate Mr. James Christensen, President and CEO, and the entire team at Gateway Bank. Strong leadership and dedication to excellence both inside the bank and outside in the community are the building blocks for success,” remarked Karen L. Dorway, president of the research firm. “Community banks, like Gateway Bank, are fiscally-fit because they go the extra mile to help their neighbors and friends be fiscally-fit as well. In the end, Gateway Bank reaps the benefits of the strong communities it helped to build,” concluded Dorway.

Gateway Bank was established in 2007 and has been serving its neighbors and friends both ethically and fairly for 12 years. Today, Gateway Bank operates through a conveniently located office on East Warner Road in Mesa and can also be found online at gcbaz.com.

Gateway Bank: “Your gateway to a new banking experience.”

Member of the FDIC and an Equal Housing Lender.

BAUERFINANCIAL, Inc., Coral Gables, Florida, the nation’s leading independent bank and credit union rating and research firm, has been reporting on and analyzing the performance of U.S. banks and credit unions since 1983. No institution can pay for or opt out of a BauerFinancial rating, Star ratings are all available for free at bauerfinancial.com.